People can do many things better alone – like certain chores and tasks – but teamwork is a better option sometimes.  Have you ever seen a sailor sail a large ship alone? Does a warlord go to conquer a city by himself? How about an organization or ministry director?  Do they do everything alone? Of course not! One person alone would never take a city by himself, a single sailor could never handle such a large ship at sea, and the director would be overwhelmed if he/she tried to handle matters alone.  These things require a team effort.

Imagine you’re hiking through the woods alone, just enjoying yourself and the nature around you.  However, you slip down a steep bank and hurt yourself. First, it is a bad idea to hike by yourself (Ecclesiastes 4:10), and second, you have no one there to assist you or get help!

However, when two or three of your friends join you for this hike, there are many great benefits:

b)     You are less likely to meander off and get lost

c)      If one of you stumbles, the others are there to keep you steady

d)     If you come across danger, you have a better chance at fending it off than if you were alone (Ecclesiastes 4:12)

Now you have heard me talk about some of the benefits of the power of companionship, but you are probably thinking, “What does this look like in real life?”  I thought I would take some artistic liberties and give some examples of companionship that I have seen and read in movies and books.  Please note that these ideas are my own and might be different from your views.

Stories of love, loyalty, friendship, courage, and family play a major role in this western TV show that aired in the 60’s and 70’s.  In multiple episodes, half-brothers Adam, Hoss, and Little Joe demonstrate sibling troubles, but they also show how teamwork can accomplish more than going alone.

When Little Joe needed help rebuilding a large logging flume that a group of men damaged, his family came alongside and helped him out – and they even completed the project in record time!  If Little Joe chose to work on the project alone, would he ever be able to accomplish that much?  (Fourth season, The Quest)

When Adam did not meet Little Joe at Signal Rock, what did the youngest Cartwright do?  He sent word to his family about the problem at hand, and the three of them set out to find their lot kin.  Together, they could cover more ground and have a better chance at finding Adam rather than if Little Joe searched the desert alone.  (Third season, The Crucible)

When Little Joe did not know how to handle a situation concerning a deaf girl, did he choose to fight his conscience alone?  Instead, he told his problem to Ben, who gave him careful advice on what Little Joe could do. It can be a large burden on a man to deal with stressful problems alone, but when he has a partner to share some of that burden, things usually move along much smoother.  (Second season, Silent Thunder)

Most of the time, when a fist brawl erupts and one of the brothers is in the middle of it, the other two step in.  Most of the time, it is only because the chaos is getting out of hand, but sometimes, the two will do it out of pure protection for their kin.  Three men can overtake a group better than one alone.

The Cartwright family shows us the wholesome values of family and collaboration, which we can apply to our lives.  We may not be wandering deserts in search of lost family, but we can most certainly use the example of teamwork to cover more ground as we do assorted yard work.  Building a flume to get timber down to sawmills may not be our issue, but it is handy to have some extra help when fixing a house or outbuilding. Whatever the case, this family of hard working ranchers show us that collaboration can achieve more than if we’re alone. 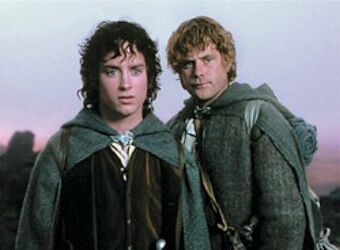 Middle-Earth and the fate of all living things depends on a single Hobbit to stop the growing evil in the east that threatens to take over the world.  Throughout all three books, Frodo Baggins and Samwise Gamgee go through many challenges and trials that a Hobbit could never imagine! However, through all of it, they remain friends.

Let us take a look at Sam for a moment.  He had the choice to remain in The Shire and continue living a simple life, yet he still decided to venture into the unknown with Frodo.  When things got really hard, and he had the chance to desert Frodo, he chose to keep his promise to Gandalf and remained with his friend.  Because of Sam’s choice, he was able to help protect Frodo from greedy Gollum (The Two Towers) and prevent his friend from slipping the Ring of Power on a few times.

If Frodo were to embark on such a quest alone, who knows what trouble he would run into!  Or what about those times when the ring seemingly called to Frodo, and Sam had to tackle his friend once to prevent him from making a horrible decision? (The Two Towers 2002 movie addition)

Everything I have said here goes back to that verse in Ecclesiastes: “Two are better than one.”  Because Sam went with Frodo, he was able to help his friend prevail in many challenges and keep him accountable with the ring.  Together, the two of them demonstrate deep loyalty and outstanding partnership.

When you live in the wild land of Montana Territory, I would highly recommend buddying up with someone!  Well, these two young men do just that. One being trained to live off the land and fight and the other having the knowledge of books and business, Daniel and Concord both embark on an adventure that neither of them can imagine as they both seek to discover their calling in life.

In this example, the two young men have different skills that can help the other.  If Daniel is facing a mountain lion, then Concord can protect his friend with the help of a rifle.

On the other hand, let us say someone plans to swindle Concord in a business deal.  In that case, Daniel knows how to sniff these things out and is able to prevent his friend from falling into a troublesome trap.

The two men have very different skills, and they can each use them to help the other.  Together, the two of them stand a better chance in the rough country and lawless towns than if either went alone.

In addition, they can help encourage and build each other up (1 Thessalonians 5:11).  Concord deals with insecurity in life, and Daniel helps him through his insecurities by sharing encouragement and sticking by his friend’s side.

Daniel, on the other hand, has only ever dealt with an occasional stage hold up and lived in town his entire life, so living in the wilderness with the constant threat of robbers is a fearful experience for him.  However, good ol’ Concord is there to reassure and protect his friend.

These are all good examples of what collaboration and friendship look like in our world.  However, there is a final example I would like to share.

As a Christian, each of the three strands mentioned in Ecclesiastes 4:12 is a part of my life.  Christ is one of those three strands. He is the strongest strand in that threefold cord, so that when the two weaker ones break, He still holds us together.  Though my life may be a wreck and my family a mess, I still have Christ as my stronghold.

In Nahum 1:7, it says, “The Lord is good, a refuge and stronghold in times of trouble.”  Our friends may have walked away from us, and we may feel alone in our sufferings, but the Lord will never leave you.  It may feel like the world is crashing down around us, and we are slipping away with it, but God is holding onto you. He is that strand in the threefold cord that will never break, no matter what.

For Christmas last year, I braided western-looking braids out of hemp cording.  Sure, one strand alone is easy to cut with a pair of scissors, but try cutting the braided cord.  It’s a lot harder, isn’t it? It is the same with companionship and collaboration. When two or three people are battling a dangerous animal, it is most likely that the animal will lose because it is outnumbered (Ecclesiastes 4:12).  Safety in numbers.

We should not feel like we have to cope with these things alone.  It’s good to have a shoulder to lean and cry on at times, and it feels good to know that there is someone out there who you can talk to and share your burdens with.  It feels good to know we have someone we can depend on to help us.

The power of love and friendship.

Finally, remember that God is one of those three strands in life.  He’s the strongest one that holds the other two together, even when they break.  He is the one in control and will always be by your side, no matter what.

I challenge you today to remember the amazing power in collaboration.  Sure, there are many things that you can do best alone, but there are just some things that work best when you do it with others.  Besides – it can be a lot of fun to do stuff when you’re not alone!

And that fantastic article was written my very good friend, Kirsten Foster. I’d like to once again thank her for her contributions to my blog, and I hope you were encouraged and blessed as you read what she had to say. 🙂

Hello there! I’m Zielle, a writer, a lover of music, an actress, a singer, a songwriter, a theatre kid, and a daughter of the One True King.

Welcome to my blog! I hope you stay a while.

The header and button is designed by the beautiful Mukta from Pique Studios! Go check out her work!